On safari with the elephant nannies: British volunteers who care for heavyweight babies abandoned by their mothers at birth

By HARRIET ARKELL for dailymail.co.uk

Their nannying job entails keeping the babies clean, giving them bottles of milk, and keeping them busy so they don’t misbehave.

So far, so ordinary, but these nannies don’t have any ordinary charges; their job is to look after and help raise orphaned baby elephants at Knysna Elephant Park in South Africa.

The young women who do this are British volunteers who have given up their time to help provide 24-hour care to the young elephants who have been abandoned by their mothers. 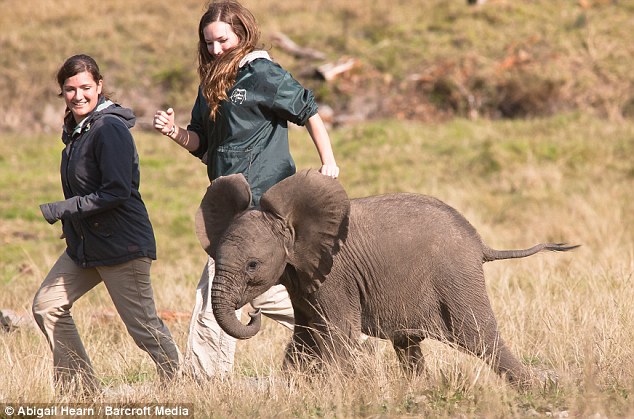 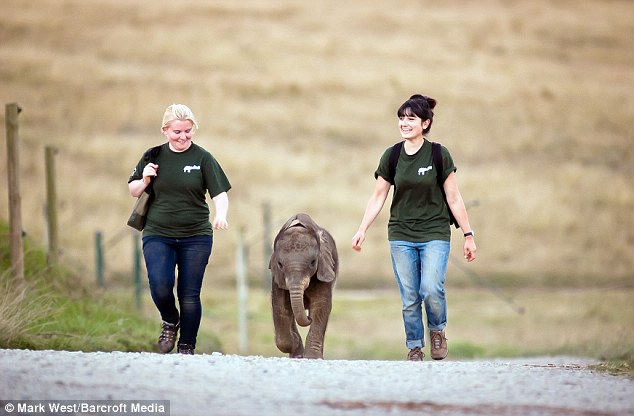 Not just any old toddler! Meet the ‘elephant nannies’

The volunteers work at the elephant park which is home to a semi-captive population of elephants, most of which have either been orphaned or rescued from abusive circumstances.

Many of the baby elephants they have to look after are in the first few weeks of their life, and so despite weighing around 13 stone, need 24-hour care to ensure they eat enough and are reassured and happy after being rejected by their mothers.

This means the elephant nannies develop a strong bond with their charges.

Miss Hearn, a zoology graduate, was supposed to be at the park for six months ‘but just never left’ and has now been there 18 months.

‘Back in England you wouldn’t be able to get experience like it,’ said the Nottingham University graduate. 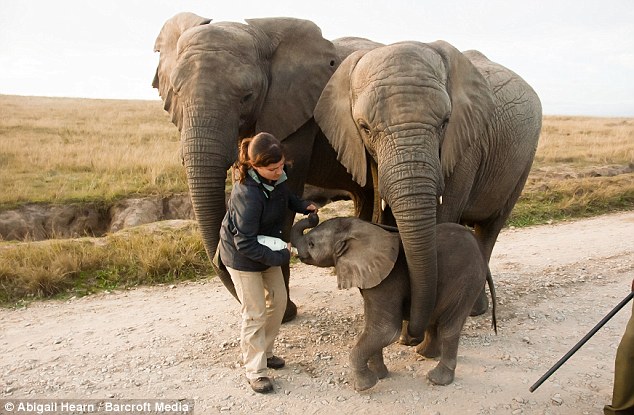 ‘I get to go out and see the elephants every day and build a relationship with them. It’s surreal – but wonderful.

‘I couldn’t have asked for a better job. When I go home to the UK and see my friends, family and boyfriend, I love telling them my stories.’

Miss Hearn added: ‘It’s not uncommon in the wild for first-time mums to reject their babies but usually the matriarchs and older females will pick up the baby and present it to the mother.

‘But in this kind of environment [semi-captive population] it’s quite difficult to do that.’

One of the jobs when looking after a new-born is making sure it drinks about two litres of mineral-enriched milk formula every two hours to ensure it is healthy. 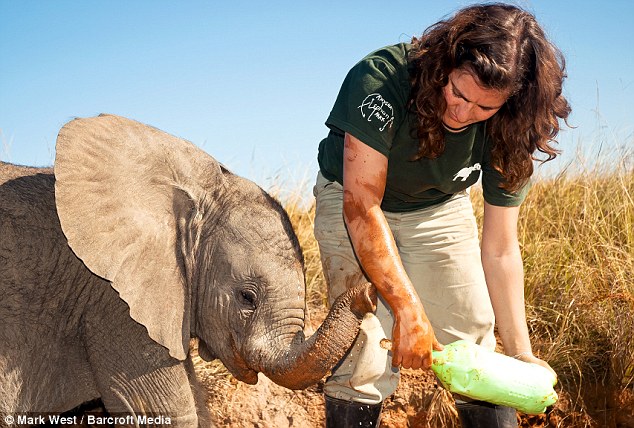 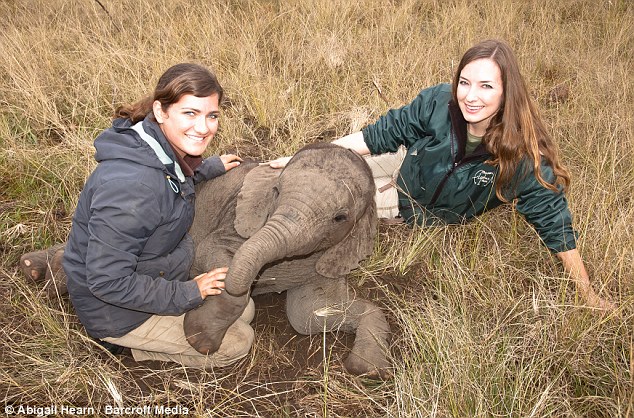 The British volunteers have to give round-the-clock care to the babies, many of whom have been rejected by their mothers

The nannies must also ensure the babies are kept warm with a blanket during cold periods, provide fresh sawdust and a mattress in their sleeping pens, and help teach them about the world.

Lisa Olivier said: ‘They’re such social animals and they learn through social learning so they’re always busy, and they always need to be kept occupied.

‘That’s how they learn about the world and how to live the next 60-70 years.’

Volunteers Melissa Dora, 25, from London, and Paige White, 21, from Bristol, take it in three-hour shifts through the night to comfort and reassure their baby elephants.

Mrs Olivier, who is also researching for a PHD into elephant behaviour, said: ‘Obviously they can’t be with their mother at the moment and it’s their mother who would comfort them if they woke up and got scared.

‘We have to make sure they’ve got a fighting chance to go back to the herd and be accepted, so we want to make them as strong as possible.’ 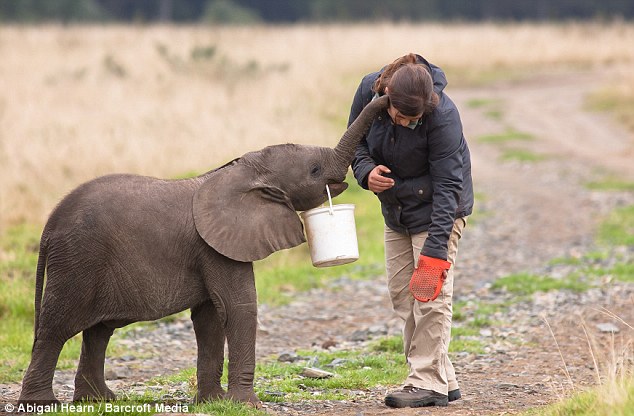 In the wild, baby elephants are often rejected by first-time mothers and helped by others in the herd 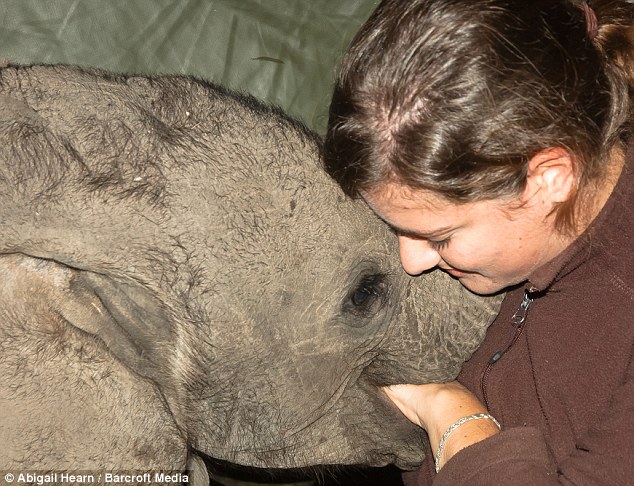 Intense relationship: The elephant nannies develop a strong bond with the orphans they look after

Mrs Olivier, who has recently got married to South African elephant manager Theo, 27, said she even worries like the elephant was her own – especially when she makes ‘strange noises’ during the night.

The Exeter University graduate first came to the park to study for her masters in animal behaviour, having previously worked in a clothes shop.

She was only supposed to be there 10 weeks but has now been there nearly three years, working under Knysna Elephant Park founders Lisette and Ian Withers, and elephant expert Dr Debbie Young. 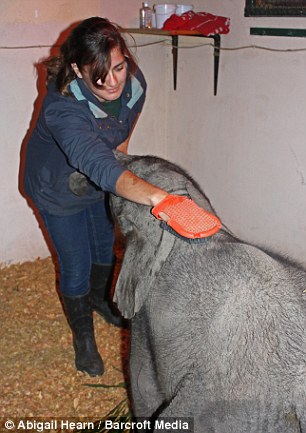 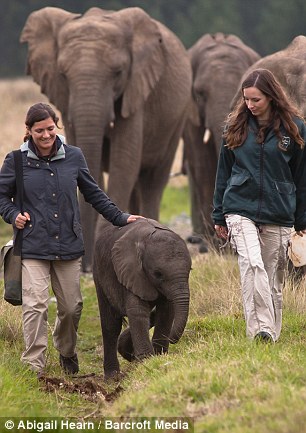 Devotions: The elephant nannies groom their young charges and work on reintegrating them with the herd 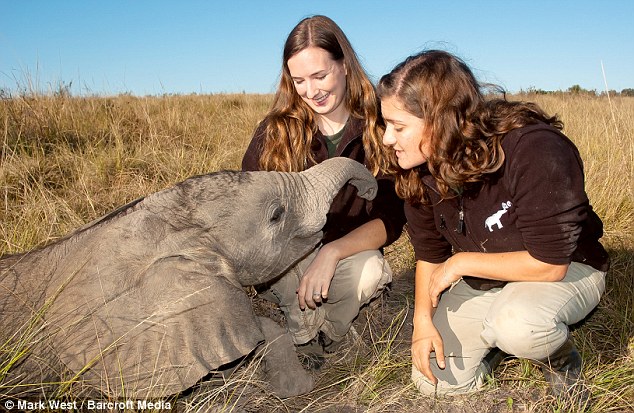 Mr and Mrs Withers founded the park in 1994 in honour of the diminishing herds of the Knysna Forest and to help those rejected by their mothers.

Many have come from abusive circumstances, while others were earmarked for culling in overpopulated national parks throughout South Africa.

As well as caring for the elephants, Knysna also conducts groundbreaking research into the relationships and dynamics of semi-captive herds.

The ambition with the orphan elephants is to get them to the stage where they can integrate naturally as if they were in the wild.