Elephants are best known by many people in the world for their teeth. It is because of the human lust for ivory that thousands of elephants are being slaughtered for their teeth. Ivory is really only dentine and is no different from ordinary teeth. It is the diamond-shaped pattern of the elephant’s tusk looking from a cross-section that gives elephant ivory its distinctive lustre.

When an elephant is born it has four developing teeth in each side of the jaws. This consists of their fairly small first and second tooth which are present after birth, and the third and fourth which are still below the gum.

The tusks present at birth are only milk teeth, which fall out after around one year of age (approximately 5 cm long) when they are replaced by permanent tusks. The permanent tusks begin to protrude beyond the lips of an elephant at around 2-3 years of age and will continue to grow throughout its life. Were an elephant’s tusks able to grow long enough they would be in the shape of a spiral (similar to the extinct woolly mammoth) because the tusk typically follows a sinusoidal curved growth pattern. The growth rate of tusks is approximately 15-18 cm per year.

About one-quarter of the tusk 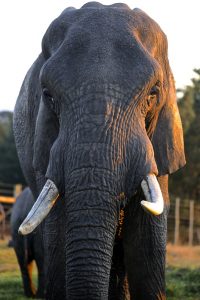 is hidden within the socket. Thus, the typical question of why people cannot just cut off the elephant’s tusks to ward off poachers is answered. There is still a large amount of ivory that is attached inside the head and attached to the skull, which has to be carved out of the head to be removed.

The actual base of the tusk is hollow and contains the pulp cavity. This usually extends quite far, and in males may reach beyond the lip line. The tusk grows from its base as fresh dentine is slowly deposited over the surface of the pulp cavity. Interestingly, for females, this cavity begins to fill in with age.

Although both African elephant sexes have tusks, there are large differences in size and weight. Typically, the male tusk has a larger circumference in relation to its length, is stouter, and is much heavier. Interestingly, some elephants are born without tusks. This hereditary condition causes huge differences in the musculature and shape of the neck and the head. Also, the carriage of the head is different and the bones at the back of the skull are less developed.

Tusks are used as digging tools, weapons and for display. However, some elephants are born without tusks and some lose them, and they do not suffer because of the lack of tusks. Elephants are right- or left-tusked, just as humans are left- or right-handed. The tusk that is used most often tends to be shorter and more rounded and is called the ‘master tusk. The heaviest tusk on record weighed 117 kg. The longest tusk ever measured was 3.26 m long.

Elephants never stop growing, although the rate of growth slows down in later years. Age is limited by the state of the teeth. Six molar teeth develop on either side of the upper and lower jaws. These teeth are 10 cm wide and 30 cm long. In an adult, no more than two of these sets of teeth (younger elephants may use three sets) are involved in chewing and as they are ground down, the sets further back move forward to take over.

As a tooth wears it is pushed forward to the front mouth and it slowly wears into a shelf as the roots are absorbed. The shelf will eventually will break off and the remaining fragment pushed out of the mouth.

Interestingly, the absorption of tooth roots is a phenomenon, which is found to take place after an injury or in old aged mammals. After the first two teeth are gone, parts of the two adjacent teeth are being worn down in each half of the jaw. This process proceeds as the chart above shows until the 6th and sometimes 7th molar appears. The 6th molar weighs on average a stunning 4 kg and has a maximum grinding length of 21cm (and a width of 7cm). This 6th molar will be present for around 2/5 of the elephants’ life. Interestingly, about 10% of the older aged elephants will have an additional seventh molar, but it is never as developed as the others.

Very elderly elephants have been known to spend more time in marshy areas, where they can feed on the wet, softer grasses. Eventually, when the last teeth fall out, the elephant will be unable to feed. Were it not for tooth deterioration, their metabolism would allow them to live for much longer.

An elephant may live as long as 70 years, although there are records of captive elephants living for over 80 years. As more habitat is destroyed, the elephants living space becomes smaller and smaller, the elderly elephants will no longer have the opportunity to roam in search of more appropriate food and will, consequently, die of starvation at an earlier age. 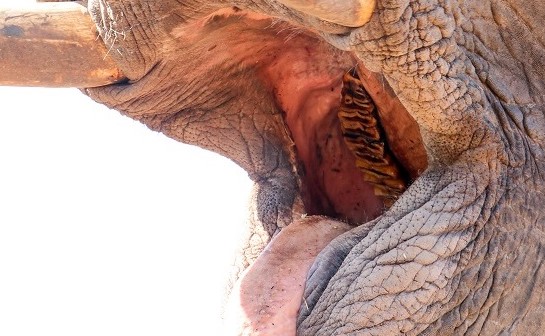